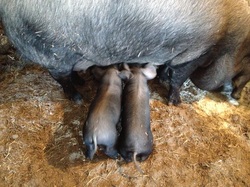 The Large Black is a true grazing pig perfect for sustainable agriculture's "pastured pork."  Although the name "Large Black Hog" certainly describes this breed, it's not just a description, it's the registered breed name for this rare heritage hog.

The Large Black is a very efficient pork producer because it can glean a large portion of it's food from grazing.  Unlike many breeds of hog, their black skin protects them from sunburn and enables them to live outdoors on open pastures.

The Large Blacks were imported into the U.S. in the 1950's and again in the 1990's where they were breed by a hand full of breeders for the exquisite and unique taste of the Large Black's pork.  When processed at around 200 pounds, the pork is lean yet micro-marbled for a moist product on the grill or in the oven.  The texture of the pork is extra tender due to the short muscle fibers which has earned it a place in some of the most exclusive restaurants in New York and Europe.  Large Blacks are also famous for their excellent bacon.

The Large Blacks are aptly named large since they can reach weights upwards of 700 pounds.  They have long deep bodies with strong backs and are always solid black.  Their ears are large and hang forward covering the eyes and most of the face.  They are among the most docile and friendly breed of hogs alive today.  The pigs start out shy but soon bond with people to the point of following them around until they give in and scratch their bellies.  We have seen children play with the Large Blacks without a problem and have never had one make an aggressive move toward a person yet!

You can find this same information and more at : www.largeblackhogs.com/

Please contact us if you are needing/wanting any pork...we are currently able to offer full, halves, and occasionally individually packaged portions of fresh pork.